> Snowmaking > How Snow is Made at Steamboat Ski Resort 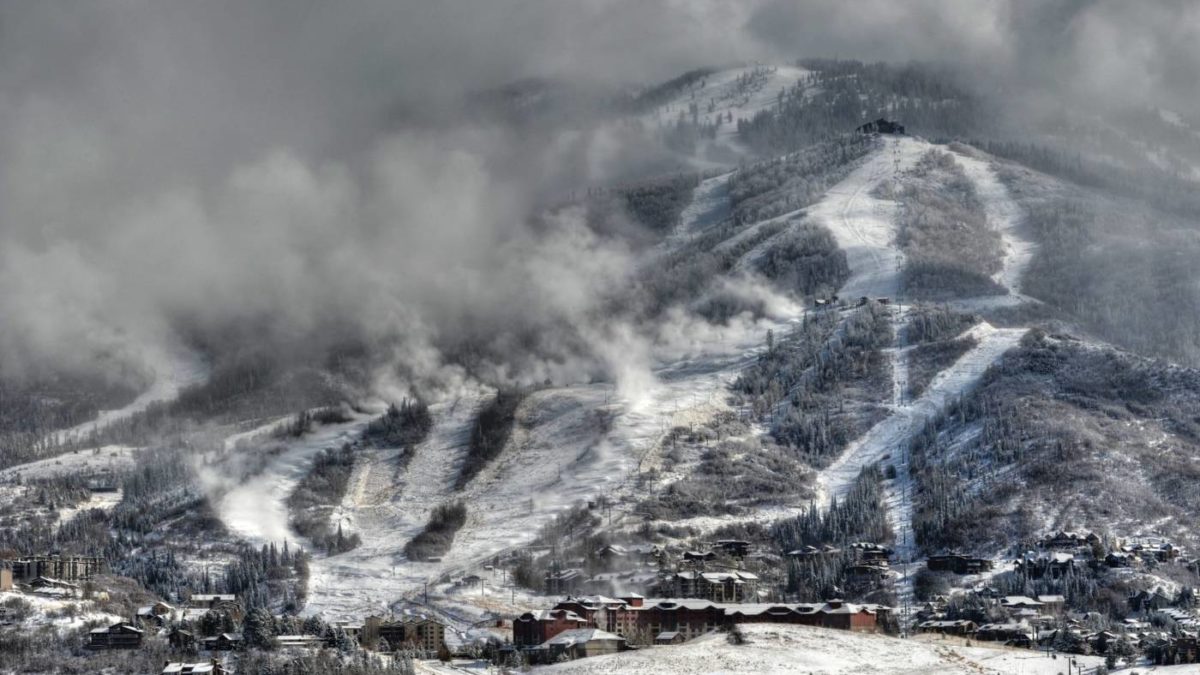 How Snow is Made at Steamboat Ski Resort

by Lisa Blake November 17, 2021
Behind the Scenes, Mountain Conditions, Snowmaking

The most modern and energy efficient way to create the early-season fluff.

Sometimes Mother Nature needs a helping hand to get ski season rolling. This is one of those years — Steamboat Ski Resort is postponing its opening day by one week to Nov. 27 due to lack of snow and above-average temps. The good news: Optimal weather is on the horizon and Steamboat’s snowmaking crew is welcoming favorable conditions over the next week.

Steamboat began making snow in 1981. Technology has come a LONG WAY since the days of neon nylon and zinc-painted hoses. Today, the resort can make over 600 acre feet of snow each season using over 300 guns served by almost 40 miles of buried pipe.

Steamboat Snowmaking Manager Ryan Olson oversees a crew of 40, or four shifts of 10 team members. These dedicated powder ninjas work 12-hour shifts, hiking up and down the mountain with detailed attention, adjusting water and air flow to each gun. The goal: To provide the very best skiing and riding surface at the lowest possible cost using the most modern and energy efficient snowmaking guns.

“Everyone used to hate the icy manmade snow,” Olson says. “We’re getting much better at making drier snow and letting those piles sit for a day or two to let the water run out so runs aren’t icy.”

The Steamboat snowmaking season generally runs from November 1 to about the middle of January. When operating at full capacity, the team can pump over 5,000 gallons of water per minute and run 140 guns at once.

But, there’s a catch. There are two major factors that determine the ability to make snow that are not in the crew’s direct control: wind and wet bulb temperature. The lower the relative humidity, the colder the wet bulb temp will be. Crews want a wet bulb of no more than 26°F. It can be 32°F outside, but if humidity is too high, water won’t freeze. The dream outlook is low wind, low temps, low humidity, Olson says.

“Generally speaking, the colder and dryer it is, the better snowmaking conditions are,” he says. “This week lows are down to 13°F and it’s looking good for making giant piles.”

Water comes out of the guns at 40°F, depending on the temp of the Yampa River and how much heat is generated through friction as it comes through the pipes. From there, it’s all about hang time. The droplets must remain in the air long enough to freeze before hitting the ground. This is when the gunrunners travel up and down the mountain adjusting the angles according to wind, humidity and other factors to get those pristine piles of soft snow.

From there, snowcat operators spread the piles around, grooming the runs to skiable perfection. If all goes well, teams can open a run after a solid night or two of snowmaking operations.

“Give snowmakers some love this season,” Olson says. “They do a lot for our mountains. They get us rolling and they get us up to that powder that we all love.”

Snowmaking is a science. Here are some commonly used terms.

Gun: Any of a number of devices used in the production of snow. Guns fall into two main classifications: Air/Water and Fan.

Hang Time: The amount of time between when the snowmaking water exits the gun and the time it hits the ground, ideally as snow.

Snomax: A “snow inducer” based on the proteins from the bacterium Pseudomonas syringae. These proteins act as extra nuclides to improve the crystallization process.

Wet Bulb: This is a measurement of temperature that factors in relative humidity to determine snowmaking optimization.